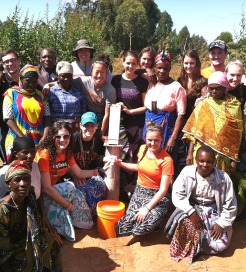 As a group of young passionate students, it is their goal to make a difference by sharing the real-life struggles faced daily by thousands of people throughout Africa with their fellow peers. Wartburg College Water to Thrive strives to not only impact the lives of Africans in need of safe, clean water, but also the Wartburg students who choose to join the exciting journey. In May 2014 and 2015 two groups of students were sent to Tanzania to participate in topping off new wells. By working with other on-campus organizations, holding independent fundraisers, and seeking out support from the generous Waverly community.

“We are excited for the future of the organization and the change that it can make in the lives of those who live in the rural African communities that we can reach. A well is more than just clean, accessible water. A well brings joy, hope, health, and a possibility of an education, and thus a future. A well is so much more than just water.” – Ahymad Lee (President of Wartburg College Water to Thrive)