This blog looks at why these areas have such high fluoride and the effects it has on the people in this region.  As we all know, the first step in creating change and generating hope is awareness….

Access to clean water is one of the most essential needs on this planet. Clean water is more than just a privilege, but it is a right and a need for the people on this earth. However, it is not universally available to everyone, which leads to a public health crisis. Billions of people suffer every day from a lack of clean water necessary for drinking, bathing, and sanitation.

In sub-Saharan Africa where there is access to clean water, there is a notable difference between the rich and the poor communities. Disadvantaged households can pay upwards of 20% more for water than wealthy neighborhoods. In this region, 48% of all people lack any access to clean water, which is why bringing clean, sustainable water is so important.  Villages that have no access to clean water are forced to walk miles every day to gather water that is unsanitary and contaminated with pathogens. This water diminishes the quality of life for people in these villages and negatively impacts their outcome in life.

“Without safe, accessible water and sanitation, these people are likely to face multiple challenges, including poor health and living conditions, malnutrition, and lack of opportunities for education and employment.”     -UNWater

The introduction of fluoride into drinking water was a major development in public health. Fluoride is essential to prevent weakened enamel on our teeth and tooth decay. In the U.S., water is fluorinated to specific levels to ensure the population gets the necessary daily value of fluoride in their diet. This is not the case in developing countries, where fluorination cannot be controlled the same way. Fluoride may not be something we think of being present in our water, but it has become an increasing controversy in the US over its affects and if it is truly necessary.

Many areas in sub-Saharan Africa suffer from toxic levels of fluoride in their water, which can be traced to the source. Women and children from villages and communities in Africa walk miles every day to a water source that is supplied with groundwater. The struggle to obtain water is only met with further complications; this water is contaminated not only with pathogens, but also with high levels of minerals, such as fluoride, from the soil and rocks at the water source. In Africa’s Rift Valley, which includes countries such as Ethiopia, Uganda, and Tanzania where Water to Thrive works, levels of fluoride contamination in water are almost 6 times higher than the recommended daily value. These increased levels are caused by the volcanic rock present here and severely impact the individuals who rely on this water for drinking and sanitation. Below is a map that shows where fluoride is increasingly high: 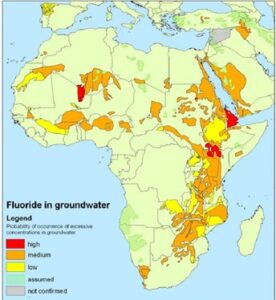 Don’t forget to tune in next week for part two of this blog post!  Get a more in-depth look at fluoride contamination issues and learn how water can be defluorinated to reduce its negative impacts…