My goal for this week’s blog is to continue to raise awareness for waterborne illnesses that are rarely talked about. Many of us are aware of diseases such as Malaria, as well as conditions such as dehydration, diarrhea, and death. Similar to last week, over the next few weeks, I am going to be highlighting three diseases caused by microscopic protozoan parasites that all lead to diarrheal infection. They are known as Cryptosporidiosis, Giardiasis, and Amebiasis. The reason I have put these diseases together, is because they are all protozoan parasitic infections and also have similar symptoms and methods of infection. These diseases may sound complex, but they simply cause intestinal distress. Over the next few weeks, I am going to introduce each disease, discuss the impacts, and close with what can be done to prevent these diseases.

Interesting Fact:  Protozoan infections are caused by a protist, a microscopic organism that cannot be defined as an animal, plant, or fungi! 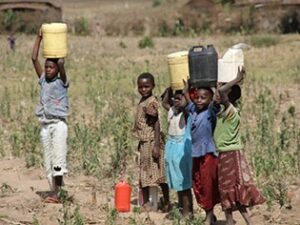 To understand these diseases better, it is important to understand what causes them and where they are prevalent. These diseases are all considered to be waterborne illnesses that cause intestinal disruption and diarrheal infection. They cause a significant amount of discomfort to the individuals who are infected, and that is why it is important to understand where they are found and how to prevent them. All three of these diseases are common in every country in the world, found in contaminated water sources, and their life cycles are able to continue using an animal host.

Below, a map shows the highlighted regions of where these infections are the most prevalent in Africa. As you can see, the areas where data can be reported, there is significant percentages of prevalence of these parasites. The prevalence of these parasites increase the infection rate, which in turn, also increases the death rate. Although these diseases are similar in their symptoms, they do differ in some ways, I will discuss this further throughout this blog series.

The first disease I am going to introduce is Cryptosporidiosis, which is also called “Crypto” for short. This disease is caused by a microscopic parasite known as Cryptosporidium that commonly infects animals through ingestion of contaminated water and remains in the intestines for weeks after infection. Shockingly enough, Cryptosporidiosis is the most common diarrheal infection caused by a parasite worldwide. Its effects are strongest in sub-Saharan African regions and it most commonly affects young children between the ages of two and twelve.

In the United States, Cryptosporidium infections are associated with children swimming in pools due to their chlorine resistance. Pool water is typically cleaned with low grade chemicals to prevent skin irritation when swimming, but this does not remove parasites such as Cryptosporidium from the water.

The second disease is I will introduce is Giardiasis, which does not have a shorter name, but is named after an infection caused by the parasitic microorganism known as Giardia. Giardia is a microscopic organism that infects a host after being ingested. It lives within the intestines of the host and is passed in the stool. The spread of this disease is commonly seen in areas that lack proper sanitation practices, especially in places where people are in close contact with contaminated water. Giardia not only can live inside the body for multiple weeks, but it can also survive in a water source for months. Giardia can be removed from water using skin safe chemicals but may take multiple treatments to remove completely.

The final disease in this blog series is Amebiasis, which is a disease caused by the microscopic parasite known as Entamoeba histolytica. This disease is once again worldwide but is most prevalent in tropical regions near the equator and regions with poor sanitation. This disease begins when the individual ingests food or water that is contaminated. Once in the system, the parasite moves to the intestines, creating discomfort and diarrheal infection. This parasite can stay in the intestines for weeks and like the other disease, when excreted, remains in the water source for months. The infection from this disease is known as Amebic dysentery, which often only causes mild symptoms, but can spread to the liver if untreated.

Take Away:  These three diseases are all commonly found in contaminated water in regions with poor sanitation practices. They can lead to severe symptoms in many cases as treatments may not be available in rural areas. In next weeks blog, I will discuss how Cryptosporidiosis infects, the symptoms it causes, and how it can be treated.