The next series of blogs I will be writing about discusses the issue of typhoid fever in Africa. This disease is highly prevalent in Africa, with a significantly higher incidence rate compared to the rest of the world. Typhoid fever is most commonly seen in countries that lack clean water and proper sanitation practices. Its infection not only affects people living in the region, but also those who travel to these regions. Below shows an image of the incident rates around the world. The areas affected with the highest rates are all underdeveloped regions of the world, many of which have a majority of their people lacking access to clean water. 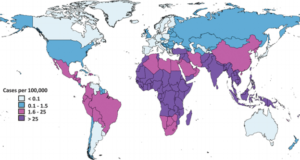 Typhoid fever is a life-threating infection caused by the bacterium Salmonella enterica. This bacterium is spread through contaminated water or food and infects the host when ingested. This disease has many similarities to malaria, as both are bacterial infections caused by a lack of clean water and proper sanitation. Typhoid predominately is common in rural areas with poor sanitation but can also be seen in underdeveloped urban areas where overcrowded populations lead to an inadequate clean water supply.

Typhoid fever is estimated to affect between 12-20 million people every year and lead to over 150,000 deaths. Climate change and overpopulation have been a big factor in the increase in typhoid cases. Increased water temperatures allow for more bacterial growth and overcrowded cities lead to poor sanitation. The bacteria that cause typhoid fever lives within the human blood stream and leaves the body through fecal matter. This allows for a further spread when water used for sanitation contaminates the source of drinking water.

Typhoid comes with an array of symptoms similar to other waterborne illnesses. The most common symptoms include a prolonged fever, fatigue, severe abdominal pain, intense dehydration, and in severe cases, serious complications and even death. Many members of these communities deal with long grueling days of gathering water, which can lead to severe fatigue on a regular basis. Therefore, these symptoms are often overlooked and not immediately treated. This increases the issue of the spread of the disease. Those whose don’t know they have the infection, can go on to infect many more in the community. The devastation of this disease is most prominent in subtropical regions in rural countries, with the highest being in south-east Asia, and second highest in Sub-Saharan Africa.

Is there adequate treatment for Typhoid fever?

As we learn more about the causes of these diseases, we are able to better understand how to treat them. Since typhoid is a bacterial infection, it has been treated with antibiotics in the past. However, the difficulty with antibiotics is that over time, resistance to the antibiotics is common. Even though when taking the antibiotics, the symptoms may become less severe, people may still be carrying the bacterium, meaning they can still spread it. Due to these complications with antibiotic resistance, scientists worked to develop a way to promote long lasting immunity. As of December 2017, a vaccine was prequalified for use, which not only promoting longer immunity, but also took fewer doses to treat. The vaccine can be used for both people showing active symptoms of typhoid, but also in people who are believed to be carriers.

Until next time, thank you for taking the time to learn more about water-borne illnesses and diseases.  The first step toward real change is awareness.  Then, together we can begin to lay the foundation for hope on our journey to a brighter future for all.