A Well of Blessings – Funding Complete! 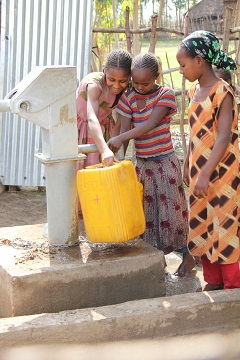 I love to travel and when I saw a flyer about a trip to Ethiopia with Water to Thrive, my first thought was I’ve never been there before so this sounds perfect – and it was! Prior to my trip, I learned a lot of facts about Ethiopia such as it’s twice the size of Texas, that there are over 80 different ethnic groups, that the majority of the people are Christian, and that there are over 5 million Lutherans! But after visiting Ethiopia, the one fact that jumped out the most was that the number of people without access to clean, safe water is staggering! At all the well sites I visited, the people were so thankful for the well that Water to Thrive had provided, and they always mentioned that they hoped that a neighboring village would soon get a well too. I was moved by the generosity of the Ethiopian people and saw first-hand how the funds collected by Water to Thrive are truly used for their intended purpose. Upon returning from this mission trip, I was moved to see what I could do to help, so I have decided to start my own campaign to fund another much needed well. I heard it once said, that you shouldn’t give until it hurts, but rather give until it feels good. So, with that in mind, I ask you to prayerfully consider a donation to my campaign for a well.