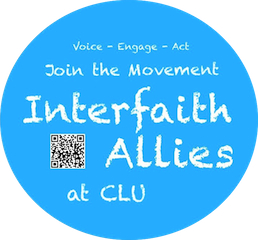 The Interfaith Allies at CLU are a multilateral movement throughout California Lutheran University’s community for better interfaith cooperation. We have signed on to two initiatives: the Interfaith Youth Core’s Better Together campaign and the President’s Interfaith and Community Service Campus Challenge by pledging to be Water Wise. The Interfaith Youth Core (IFYC) is a national grassroots movement designed to empower students to find their Voice, Engage across difference, and Act towards a common goal in community service. Eboo Patel, the founder of the IFYC, was also President Obama’s advisor on interfaith matters during his first term. Eboo also started the President’s Interfaith and Community Service Campus Challenge, which we have also signed on to for 2012-2013. CLU’s Green Week April 22nd-26th is the culmination of both of these programs in one massive campaign. We are conducting a multi-pronged sustainability project with a focus on water consumption. It involves 1-7 days of 1) participants tracking how much water they consume each day using basic utilities like the sink, shower, water fountain, water hose, etc. 2) participants committing to only drink water for the duration of the campaign, and 3) donating the money that would have been spent on alternative beverages towards a water well in Ethiopia. We appreciate your commitment to be Water Wise!
Like our Facebook page at <www.facebook.com/InterfaithAlliesAtCLU<http://www.facebook.com/InterfaithAlliesAtCLU>> and check out the other Green Week events at <http://www.callutheran.edu/student_life/calendar/series/green-week-2013/>.