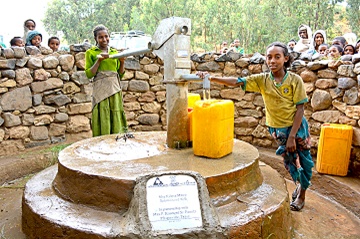 In 2011, Ed Scharlau came to Texas Lutheran University to speak about Water to Thrive in our chapel. Afterwards, two students, Amy Lees and Wako Bungula, got together with Tim Barr, the Director of the Center for Servant Leadership, and decided that TLU should start fundraising for a water well. One of the students, Wako, was actually from Ethiopia, and Amy had led a fundraiser and funded a well through her church some years before. After hearing about the group, Elisa Wellnitz joined as well because of her past history with Water to Thrive! And thus, along with a few other students, our first committee sprouted. That year, we planned and organized a Silent Auction and Benefit Dinner. The next year we re-grouped, added another student with W2T history, Chelsea Woodmancy, and had another Silent Auction and Benefit Dinner.
Fast forward to 2016, our committee transformed in to an official student organization. We host events throughout the year to raise awareness and allow the students, faculty, and staff to learn more about why we work so hard. This year we have improved efforts to do more presentations with local congregations and civic organizations to broaden awareness and invite others to join us in our mission of providing clean water.

By the end of this school year, we are hoping to build our third well. With the support of the TLU and surrounding communities we know we can make it happen! Water to Thrive has brought awareness to our campus about something so simple we hardly think about it: clean water! Water is so important, it can change a person’s life: from spending all day walking to bring home diseased water, to having enough time to start school. We are all people of this Earth, and being a global citizen means that we need to care for each other!