Today was another day in the field with our partners in the Ethiopian Orthodox Church, with an agenda of visiting four wells. And it was a perfect example of when we say we support water projects in remote villages.
The first two wells were located about a 25-minute walk from the last piece of navigable road. Although this area of Ethiopia is fairly high in elevation, it is relatively flat and the soil is dark and rich. The land can support many people, animals, and crops.

We passed field after field of teff, which is the grain that is used in producing the Ethiopian staple, injera. Teff looks like a short, delicate, light green grass and its grain is tiny. It has become popular as a superfood for its nutritional punch including protein, gluten-free, fiber, and other vitamins.

A couple of other observations about this part of Ethiopia include:
1. Men here wear shorts which is very unusual for grown men
2. The women carry everything on their head vs. on their backs. I even saw a basket with a rooster being balanced on a woman’s head
3. The homes are rough, square, wooden structures which what appears to be mud and straw filling in the cracks

4. Animal dung is used as fuel, as opposed to the wood and charcoal that seem to be more common in other areas of the country

The second half of our day, I earned my stripes and my respect for the women who fetch water on a daily basis was hugely reinforced. The walk to one well took 45 minutes one way, and the last well of the day took more than an hour to reach. 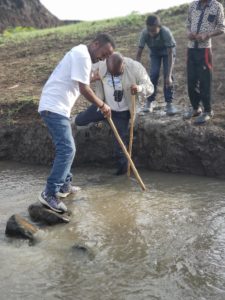 At the first well, we spoke to a young lady, Cassaye Alebachew, who told us about walking 80 minutes to the local river for water. Her husband would tie a rope around her waist so she could wade into the river to collect a jerry can full of water. She would make the walk as many as three times a day. Her walk made me feel a bit guilty for struggling to walk with nothing more than a small camera and my phone to weigh me down.

The last well of the day…I kept wondering if I was walking to Sudan. I was pretty certain I was in a another country by the time I got to the well. I fell into a small river that we crossed once the truck could no longer drive us. I saw a sick man being carried back to his village from the hospital.
Once I arrived at the well, I observed a group of children gathering water out of a puddle next to the stream. This was the community’s water source before the well was finished just a few months ago. They now use the dirty puddle water to water their crops and to use for washing.
I had my usual entourage of young children, all girls this time. I sang songs to them and helped them practice their English. They told me (through an interpreter) that I was the first firengi (foreigner) they had ever seen. I asked how they knew I was a foreigner if they had never seen one, and they mentioned my white (milky) skin. They helped me forget about my aching muscles, hot blistering feet, and exhaustion.
Finally, after walking with me, holding my hand, and asking for me to take them to the U.S., they bid me farewell. These children have my heart!
Share on Facebook Share on Twitter 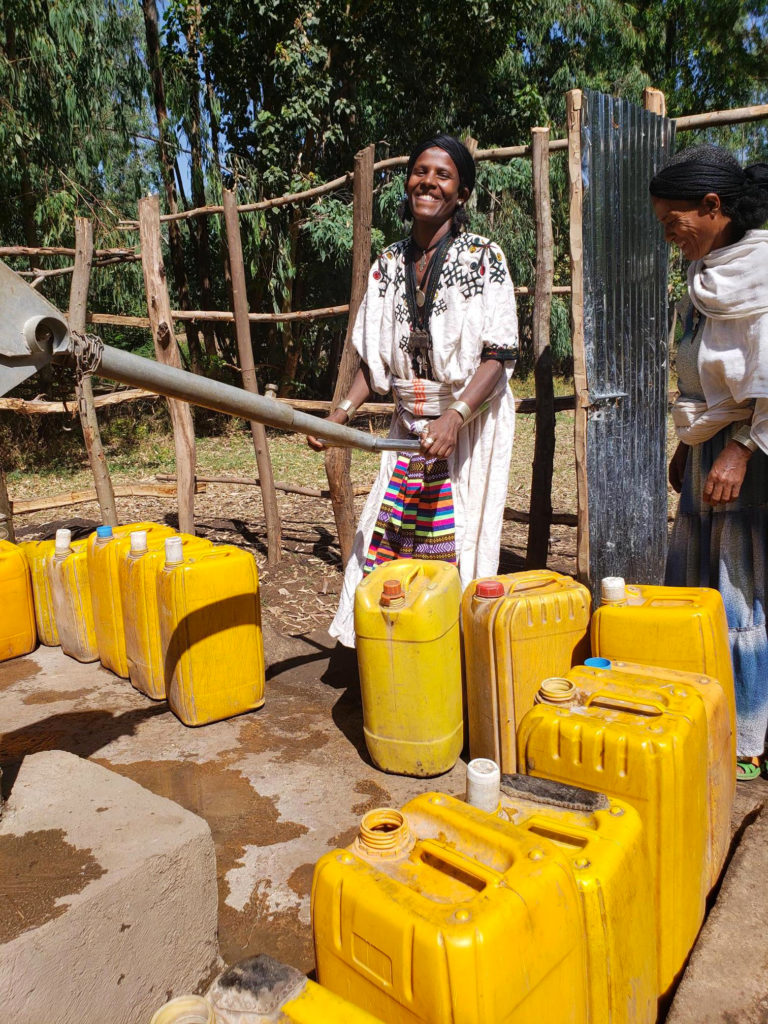