June 5 – Gonder and the Four Sisters

After visiting Lalibella, we had a short flight to Gonder which is consdidered the Camelot of Africa because of the Medieval castle ruins of the Gonderian kings. The castle ruins are encircled by a wall in which there are 12 entrances. We used the royal entrance and the warrior gate as our exit. UNESCO and the Federal and Local Government are all working in collaboration in preserving the ruins. The ruins sit on over 6 acres of land and includes stables, a feasting room, musical performance hall, a spa for the king and his concubines and a cage for lions. The lion was the symbol of strength and courage of the kings. One of the wives of a ruling king, succeeded him upon death and served as a model of female leadership by promoting women vocational programs.

After leaving the ruins, the group relaxed at a local coffee shop/retail store. Lost sunglasses were replaced, a much needed horsehair flyswatter was purchased along with a Jebena (traditional ceramic coffee pot). A pop up dance party ensued after the shop worker turned up some music and displayed the neck and shoulder movements of the traditional Ethiopian dance moves.

We had dinner at Four Sisters restaurant which is actually three sisters and one daughter. The place is rather obscure as we drove through what appeared to be a desolate field and absolutely empty gravel parking lot. We were greeted by a bugle blast from the parking attendants who directed us to the lit entrance where a couple was performing a musical welcome. We chose to dine outside and because it was windy, each diner could choose to don a poncho-like garment for warmth. The restaurant was beautifully decorated with paintings by local artists and we were serenaded by the same man who greeted us at the door. We feasted on traditional Ethiopian injera, wot and tej. We were well fed and ready to get an early start the next day to visit water projects. 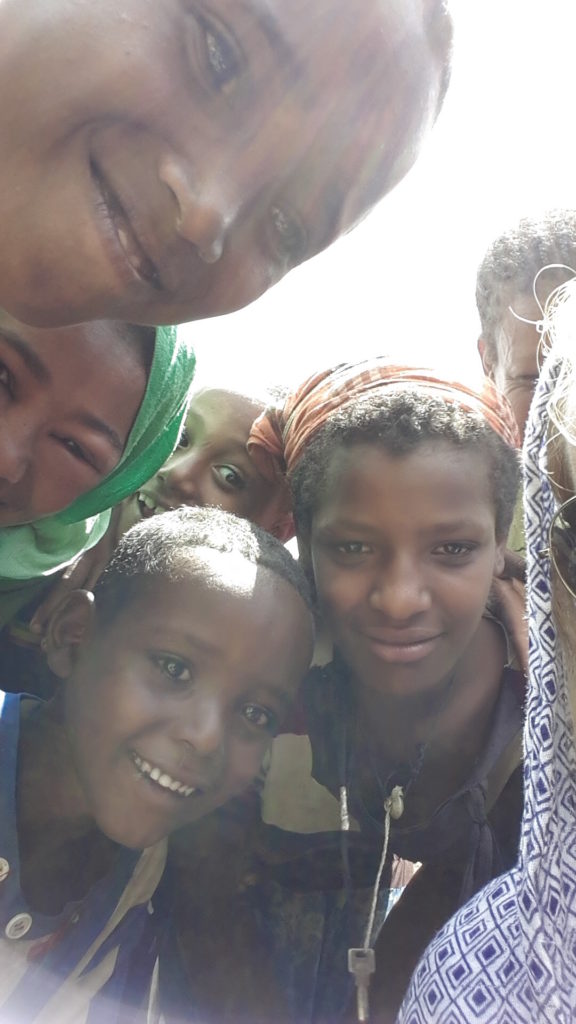