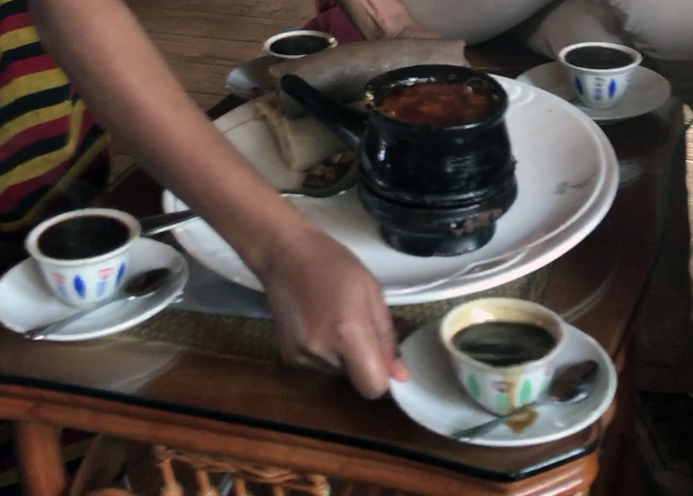 Learning about the traditional foods of Ethiopia is a special part of traveling with Water to Thrive. Today, intern Madison Mageira describes her experiences at table.

Time to talk FOOD! Since being in Ethiopia, I have had the opportunity to try some amazing new dishes! 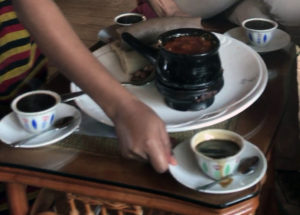 The first traditional Ethiopian meal I ate consisted of jebena buna (traditional Ethiopian coffee), popcorn, and injera with shiro. The word “jebena” is the word for the pot used to brew the coffee and “buna” means coffee in Amharic. Jebena buna is very strong coffee because unlike coffee in the United States, which is water that has been poured over coffee beans, jebena buna is a mixture of ground up coffee beans with hot water. This liquid is inside the jebena and a ceremony accompanies when the jebena is poured out for the first cup. Everyone receives a small cup and then hot coals are brought out which burn incense. The jebena sets on the hot coals and then is poured. The first cup poured is called arbol, which is the strongest cup. The second cup poured is called tona and it is a little weaker than the first. Finally, the third cup is called bereka and it is the weakest coffee. Jebena buna is bitter and strong so it is served with sugar. 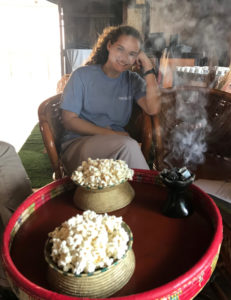 In addition, popcorn mixed with sugar is served as the side dish to jebena buna. All of us love our jebena buna, especially before long days visiting projects! Water to Thrive’s Ethiopia project manager, Gashaw, especially loves jebena buna – he has three or four cups a day and tonight after dinner, he even drank some at 9 pm just because he loves it so much! 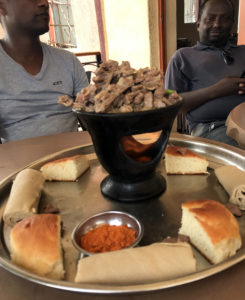 So far, we have also eaten lots of injera and shiro. Injera is a staple in Ethiopia. It is sour bread with a sponge-like texture, which is used as a form of plate. Injera is served with sauces, such as shiro, on top and then everyone eats with their hands  and breaks off pieces of injera to scoop up the sauces. Gashaw also really loves injera and jokes about his “injera belly” from eating too much injera. Shiro is also delicious and one of Susanne’s favorites! It is made of chickpeas and a blend of spices and can be relatively spicy depending on the different spices used.

We also had a meal of injera with lentils, chicken and beef stews and cabbage. I also tried goat for the first time yesterday! We had goat tibs (“tibs” meaning roasted), which was goat pieces served in bubbling oil and juices! Injera and bread was served with that, along with berbere to spice everything up! I must say I enjoyed the goat tibs and hope to eat them again while I am here in Ethiopia!

Other food that we have eaten while here is Italian food! The Italians occupied Ethiopia in the 1930s and their influence is still seen today in the prevalence of Italian food on Ethiopian menus. They have pizza, pasta, and Italian desserts (basically all the carbs). I have tried different pastas and had my share of pastries, croissants, and tiramisu! I have yet to try the pizza here so that may be next on my food agenda!

Besides learning about how delicious the food is in Ethiopia, I have learned more about traditions surrounding mealtime here. Meals are very communal, with everyone sharing one big plate and grabbing their share with their hands. There are traditions before some meals, like before the pouring of the jebena buna.  Overall, mealtime is a special time for everyone to come together and share food and good company! 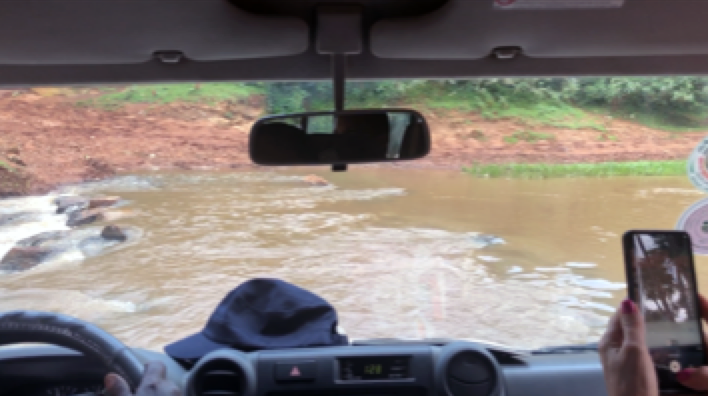 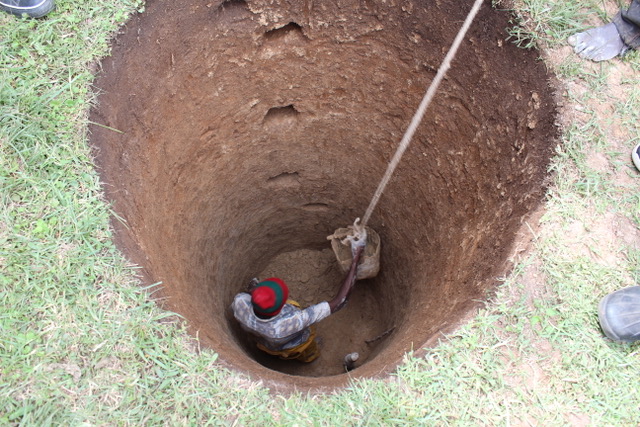