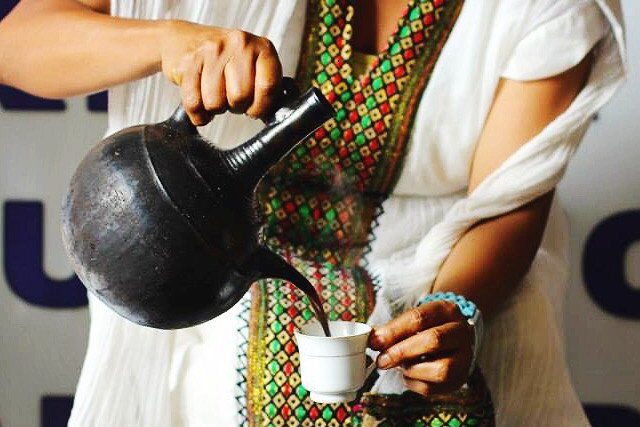 Coffee: the magic elixir of early mornings for so many people around the world. The magic bean juice has been celebrated for over 2,000 years and is the most traded tropical agricultural commodity in the world. It is grown across Asia, Africa, Central and South America, but few know the story behind the discovery of coffee. Although no one knows for sure, legend has it that in the 9th century, a goat herder in Ethiopia named Kaldi accidentally discovered coffee. He watched as his goats were energized after eating the berries from the coffee tree and shared his observation with the local monastery. The monks learned that the brew aided in staying awake and coffee spread throughout the Middle East, aided by pilgrimages to Mecca, and spread into Europe and eventually the New World.

Coffee is engrained in Ethiopian culture and part of the daily ebb and flow of daily life. Across the country, coffee is served in every imaginable corner from the fanciest restaurants to outdoor street-side stalls. The serving of coffee is a ceremony much like the tea ceremony in Asia. The coffee ceremony is central to any celebration or social gathering.

The ceremony involves spreading grasses and flowers on the floor along with the burning of incense. The traditional round bottomed clay pot called a Jebena is filled with water and placed on burning coals. The beans are placed in a wok-like metal pan with a long handle and roasted over the coals or fire. As the coffee aromas are released, the roaster moves around and the smoke is waved into the faces of those awaiting a cup of coffee.

After the beans are roasted, they are ground using a mortar and pestle. The grounds are then added into the Jebena of boiling water. The coffee is poured into tiny cups without handles (which makes drinking the coffee a bit of a challenge). Sugar is typically added if available, but cream or milk is not. On occasion, when sugar is not available, salt is added. The ceremony consists of three pours called abol, tona, and baraka. Each pour decreases in strength and is served with popcorn, roasted barley or sometimes peanuts.

Ethiopia is the world’s 7th largest producer of coffee and Africa’s largest. Experts agree that Ethiopia is the only place coffee grows natively. Arabica has its origins in Ethiopia and is believed to be the first species of coffee to be cultivated. Ethiopia is home to several distinct coffee growing regions. Much like wine, coffee is influenced by the soil, climate and processing. Three of the most well-known are Harar, Sidamo and Yirgacheffe. 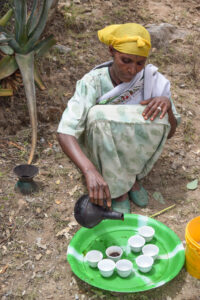 Of course, critical to making coffee is the availability of water. Water to Thrive is a 501(c)3 nonprofit dedicated to the mission of providing clean, safe drinking water to rural villages in East Africa. In addition to Ethiopia, the nonprofit also works in Uganda and Tanzania. Water to Thrive works closely with indigenous non-governmental organizations to identify the neediest villages, mobilize the communities, build water wells, train the beneficiaries in sanitation and hygiene best practices and establish a wash committee, elected by the village, to maintain and ensure the sustainability of the well.

Water to Thrive aims to share with supporters the impact of clean water, and also the beauty and significance of the culture of Ethiopia, Uganda and Tanzania. Water to Thrive also imports green coffee beans to Austin, Texas, offering fair market prices to local farmers. The coffee is roasted in Austin and then sold here in our online store. The sales support our small nonprofit in continuing its important mission.

Someone else who understands the connection between clean water and coffee is Eden Wild. Eden, who was adopted from Ethiopia and now lives in Arizona, has become an entrepreneur at a young age. She roasts and sells coffee through a project called Buna Tarik Roasters. “Buna” is the Amharic word for coffee and “Tarik,” which is Eden’s birth name, means story, so she likes to say it’s “coffee with a story”. Eden wanted to make an impact in her birth country, so she decided to donate the proceeds from her coffee company to Water to Thrive to fund clean water. She has already funded one well for an entire village and continues to roast coffee, build wells and change lives. 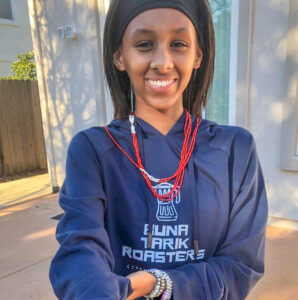 Pictured above is Eden Wild in her Buna Tarik gear!

Eden has also worked with the Salvation Army to make a difference. They featured her story and Water to Thrive in a special video. Click here to watch! 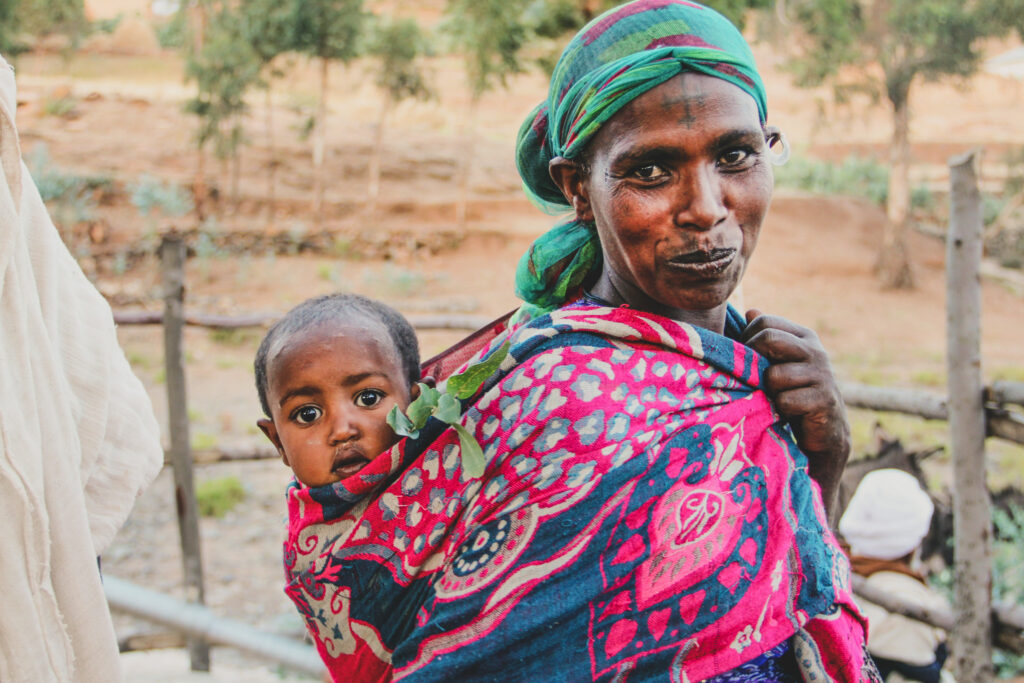 Previous Post Join us in honoring moms for Mother's Day!

Next Post Updated Statement on the Crisis in Tigray